The Ventus OGI detects and visualizes hydrocarbon gases, including methane, propane, and butane.

On the near horizon, the oil and gas industry will be required to answer calls from consumers, investors, utility companies, and regulators to deliver cleaner energy paired with far greater transparency about greenhouse gas emissions, including methane and other gasses. While the carbon footprint of natural gas is relatively low, its primary component methane has more than 80 times the warming power of carbon dioxide over the first 20 years after it reaches the atmosphere.

The climate warming impact of methane emissions has been well-known in the energy industry for many years. In the wake of the COP26 meetings in Glasgow Scotland in November of 2021 awareness suddenly shot up for millions more people around the world. There are now more than 100 international signatories, including the U.S., to the voluntary Global Methane Pledge, committing all who signed to cut methane emissions by 30% by 2030.

According to the U.S. EPA, natural gas and petroleum are the second largest human-caused source of methane emissions in the U.S., second only to animal agriculture.  Fortunately, awareness of the environment risks from methane is increasing and emissions from the energy sector can be mitigated, in part by deploying the latest in OGI (optical gas imaging) technology. 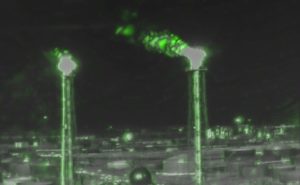 The Sierra-Olympic team is proud to be on the cutting edge of this technology with the Ventus OGI, the smallest, lightest OGI camera core available. Third-party testing determined the Ventus OGI meets the regulatory standard in EPA’s OOOOa standards and documentation of that testing is available upon request. Look for Ventus OGI on the Colorado AIMM (Alternative Instrument Monitoring Method), as well.

Across the value chain, the oil and gas sector is intensifying efforts to detect and repair systemic problems that lead to leaking methane. Whether as a part of market-driven environmental, social and governance goals, or in preparation for stricter methane emissions leak detection and repair regulations, the industry is steadily moving toward delivering cleaner, lower emissions energy. Sierra-Olympic Technologies, Inc. is a respected leader in the development of state-of-the-art technologies that are poised to identify and reduce methane emissions and advance the goals of the Global Methane Pledge quickly and effectively. For more detailed information on our OGI work, please visit us at: Sierra-Olympic OGI technology.

For product and industry updates, sign up to receive the INFRA Reader newsletter.